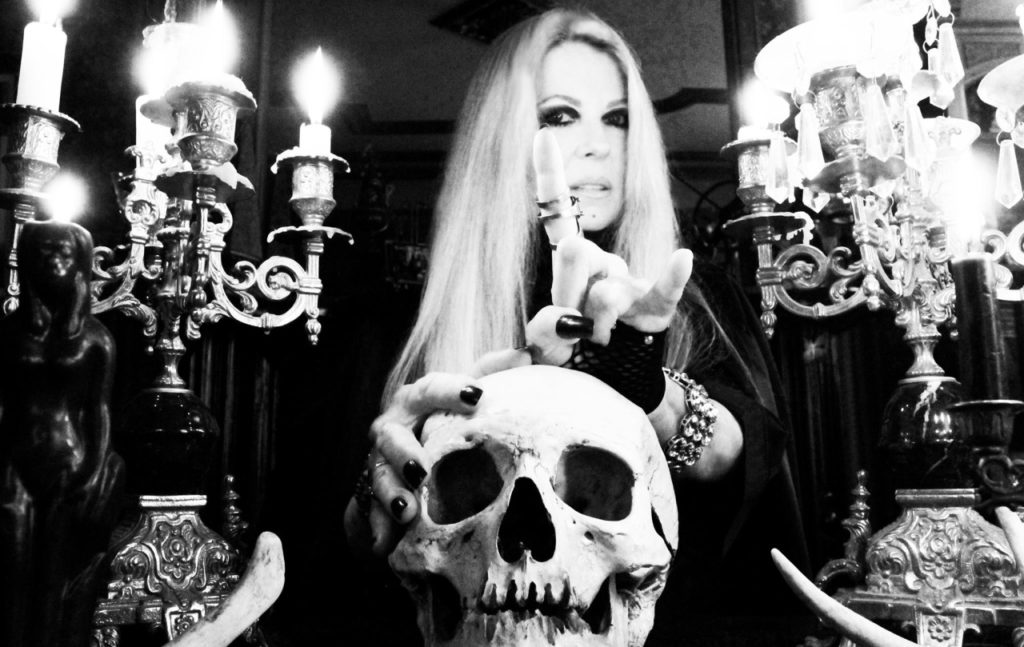 Coven is maybe one of the most important Bands for the beginnings of Heavy Metal and the rituals and occult atmosphere a lot of bands nowadays use for their shows. Now 50 years after their groundbreaking Debut Album "Witchcraft destroys minds and reaps souls" Jinx Dawson will answer some questions for us about the history and the future of Coven.

UG: 50 years ago, you released your debut „Witchcraft Destroys Minds And Reaps Souls“. What do you think about your first release after all those years?

Jinx: I knew back then it was the definitive musical release on witchcraft and the occult as it was meant as a scholarly work. I am happy to see that it has held its position in occult research as many films and television shows have looked to the album for inspiration as have many bands over the years.

UG: In my opinion, your debut is simply atmospheric and timeless and you have inspired many people to this day. How do you feel about seeing the fans at your current shows still celebrate your music?

Jinx: I must say the blood in my veins warmed in Chile and Brazil where they sang along to most of the songs, especially 'Wicked Woman'. And where we had to have large security teams escort us to our bus aftershow. And in Czechoslovakia where there were 20 thousand Cherished Friends chanting COVEN at the end of our musickal ritual. And in Paris where the crowd tore down a fence to shake hands and take photographs. And I do not call them fans. I call them Cherished Friends of the Circle. And they fill my dark heart with deep affection indeed.

UG: What kind of music did influence you in your career and life?

Jinx: I was a scholarship student of opera at age 13 at The Jordan School of Music, so opera was my background. A few months later I was also in a rock band, so I blended the two. I also was a student of piano, specifically studying classical baroque. There were also Obeahs working in the big house who sung hoodoo songs which I learned as a child.

UG: There are already many questions in other interviews on this topic, but I still want to take it up briefly. At that time, Coven brought a lot of new things to the music scene, for example the much-discussed "sign of the horns" or the then shocking „occult appearance“ on stage.How do you feel when so many musicians try to copy it over the years?

Jinx: Imitation is the sincerest form of flattery. To imitate someone is to pay the person a genuine compliment, often an unintended compliment. Though I do struggle with bands where the imitation has a lack of knowledge for the truths. But then again the occult is esoteric so it may serve well when they get the truths wrong.

UG: How have the new shows been different from the ones you played back then?

Jinx: Not really much different from what we presented from the beginning. I almost always came out of a coffin and we play most of the 'Witchcraft' album songs. We still do a ritual and sometimes have a live crucifix inverted onstage. We did add video which presents the visual occult history of Coven. The audiences are a bit different as they were very stunned back in the day at our presentations. And the difference now is that the Cherished Friends sing along to the songs.

UG: You've certainly had countless of them, but can you tell us some remarkable backstage stories?

Jinx: There are many wicked stories indeed but I fear I must tell you that I wish to save them for the book I am now writing.

UG: I was so happy when I got the news, nearly 2 years ago, that you finally come to Germany for the first time in 2018. What do you think about the German scene and do you have a place that you would still like to visit?

Jinx: My ancestry has much German, so it indeed feels very familiar traveling and performing rituals throughout Germany. We have covered many miles of the country since 2017. Appeared at many cities and driven though much of the countryside. The music scene is quite active and alive. And very interested in the occult and its history. I would like to spend more time in each place but it always seems we must move on to another.

UG: In 2013 you worked with former Coven Members Oz Osborne, Steve Ross and Rick Durrett together again. Do you plan some special concerts for the anniversary, maybe in collaboration with some of your former members?

Jinx: They are currently not active members of the Coven and have private lives now. So I do not know if we shall ever unite in music publicly again.

UG: Now, for the 50th anniversary, you released a box-set that contains your first three albums.What can you say about the release and what can your fans expect for the future? Will there be a new Coven release anytime soon?

Jinx: There too contains much of the 'Jinx' Coven album released in 2013 which contains some olde recordings in which original members are present. Prophecy Records did a stellar job in reproducing the magickal essence of Coven as did Matt Bacon who spearheaded the project. Many months of searching for elements, remastering by new blood Coven keyboard player and engineer Alex Kercheval and artistic presentation by all went into this set. From the velvet box to never seen photos to a Coven sigil banner to drawing my blood for the printing of the numbered certificate - all was meticulously thought out.

UG: Magick has always played a big role in the music of Coven. What does magick mean to you personally?

Jinx: Everything. I live my life through magick. I practice musick and I practice magick everyday, mostly after the sun goes down. I am a night being. I grew up in the Left Hand Path and shall continue down that road of shadows.

UG: Thank you very much for the Interview and I hope to see you soon on Tour again.