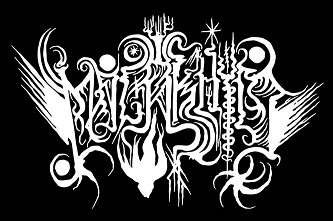 Hole In The Svn are an international group of promoters with members from Germany, France and Switzerland, who established an ongoing black metal concert series in Kassel in 2018. With “Hole In The Svn: Transzendenz”, the fifth live ritual, they have decided to conduct an introduction to the bands that will partake in the upcoming concert. As natural partners and allies, we are glad to host them as guest writers for a weekly special. Once a week we will post an interview held with members of Malakhim (SWE), Dysangelium (GER), Theotoxin (AUT), KVR (GER) and get some inside information about their history, future plans and what to expect at the show in “Goldgrube Kassel”. First in line are Malakhim from Sweden:

Malakhim is one of the most interesting bands to recently come from Umeå, Sweden in the last couple of years. Since their formation in 2015 to this day, they have released only two EPs, yet both of them are unique in their own way and hold their own conceptual sound and atmosphere. Malakhim was chosen to headline Hole In The Svn: Transzendenz. To elaborate more on the band and what they are planning for the upcoming show in Kassel, we have gathered with “E” to conduct this interview.

HITS: Greetings, how are you doing? Please introduce yourself and your position in the band.

E: Good, thank you. E here, I handle the vocals for the band.

HITS: “Malakhim, in Hebrew it means ‘Angels’ or ‘Messengers’. How did northern Swedes such as yourselves come across a name which has its roots in ancient Mesopotamia?”

E: Once the band was out of its cocoon we started to actually write our own material and decided it was time to also give it a proper name. A lot of discussion was had around this. The dual meaning of the word fits the band and a lot of the lyrical content. We had some help from my friend Tom from Mortuus Umbra/Har to ensure the spelling and the meaning was correctly interpreted.

HITS: As always, our interest in bands and music goes beyond the music itself and into its contents. Your lyrical theme and concept, it feels, is very devoted to the satanic notion. What are your schools of thought and/or spiritualism?

E: That's a very big question best spent answering in detail in a more private setting, but I'll try to offer a glimpse at least. I see Satan as a perfect representation of the antinomian currents of the world. The Devil represents destruction, struggle and carnal lust, but with this also comes liberation from current norms and traditions that inhibit or limit our mind and flesh. This is my view of satanism and something I subscribe to. I don't adhere to any particular spiritual current, but there are some authors and practitioners that I find particularly interesting, such as Crowley, Grant, Fortune, Regardie from the classical authors and of the later era ones like Chumbley, Nefastos and Peter Grey. I find parts of the Sinister Path material very applicable from a philosophical point of view as well.

HITS: Usually when a band writes material they divide roles into ‘musicians’ and ‘lyricists’, as if the musicians writes the music for a song and the lyricist add the lyrics on top. Tell us about your creative process and what inspires you both as musicians and lyricists?

E: As a lyricist it's hard to pick a particular notion that sets my creativity ablaze. I find other forms of art inspiring, be it paintings, literature, movies or other forms of art. Experiencing this can sometimes trigger an inspirational burst where I end up with a concept or just one line of text, and I spin from there. It's similar with music. I get a tune in my head, usually just a short snippet, try to recreate that and record and then sit down with the guitarists of the band and try to formulate that into an actual riff or lead.

HITS: Your live appearances are numbered, it feels as if you’re either very picky with live shows or just haven’t ‘made it’ yet to public awareness to be booked more frequently, what are your thoughts?

E: The latter. While we're unlikely to accept any and all offers, so far we can't exactly boast with being able to turn down loads of them. I think it's down to the fact that we're still relatively new and from a remote place which unfortunately does put a bit of a dampening effect on the interest of bookers. I am certain this will change.

HITS: In the last couple of years it feels as if there is a wave of too many black metal bands that have popped up, yet very few are able to transmit a sincere concept in their music and usually those bands fade and die. What do you feel about this phenomenon? Do you think it damages the black metal scene or is it just a fad?

E: It's the effect of accessibility I suppose. The internet has made what was more of a closed scene more accessible, meaning more people are drawn in with their own impressions on what it should and shouldn't be. Does it damage the scene? It depends - if you're not part of something you can't really damage it permanently either.

HITS: So far you played at some impressive events in Scandinavia (House Of Metal, Rites Of North, Outbreak Of Evil) and it’s clear that you aim higher. What was it like to play alongside bands such as Svartidauði, Sinmara and Acherontas?

E: So far so good. I'm really glad we got to do the gig together with Svartidauði and Sinmara as it was something me and Þorir had been discussing for some time. It was also a great thing to see such a tour actually come by our hometown. Being so far north it's frustrating that we get quite little of the really good underground tours coming by. Rites of North was a fantastic event as well, professionally organized and perfect circumstances. Possession curbstomped the entire thing. Savage!

HITS: We are extremely thrilled to have you on the bill for Hole In The Svn: Transzendenz, since it will be your first show on European shores, can you tell us what the audience can expect at the show?

E: A proper introduction to Malakhim and our past and future releases. Join us!

HITS: Thank you for your time, looking forward to the show in April!

The interview was conducted by Hole In The Svn for undergrounded.de and "E" from Malakhim
More information to the event HERE and band HERE