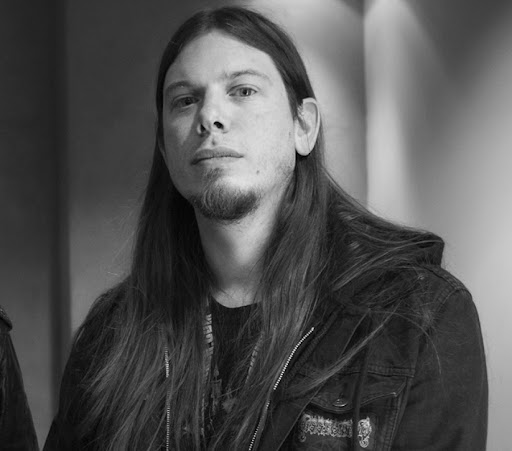 Sometimes the written word is mightier than the music! This saying (I just made up) shows nevertheless, that there are projects beside music, which are very important for the scene and art. Dayal Patterson, founder of Cult Never Dies (which is a publishing house and clothing company) chose a rather unconquered path to support extreme music.

Therefore it is time for Undergrounded to visit him in his lair to take a closer look at the man behind „Cult Never Dies“.

UG: I can imagine that it’s hard to try to explain, what you are doing in only five sentences, but let’s try!

Dayal: I have been writing about music, particularly underground metal, since I began a fanzine in the early 2000s and have since written for Terrorizer, Record Collector, Metal Hammer and Decibel. In late 2013 I released a book called 'Black Metal: Evolution Of The Cult' and also a mini-book companion called 'Black Metal: Prelude To The Cult', the latter released on my own publishing house Cult Never Dies. Since then, we have released three more full-length books about black metal/extreme metal as well as shirts and hoodies from the bands involved, such as Beherit, Ulver, Rotting Christ, Loits, Mysticum and more. We have also arranged shows in London for bands such as Lifelover, Hypothermia, Cult Of Fire, Scythian and Mastiphal, as well as free exhibitions for artists including Ester Segarra and Christophe Szpajdel. That probably covers it!

UG: This is quite a summary if you ask me. Metal Hammer is known as "the" metal mainstream mag, does your writing somehow interfere with writing for this publication?

Dayal: No, to be honest the two activities take place with very little crossover. However I have no doubt that writing for Metal Hammer every month for a decade played a part in improving my writing and interview technique, and similarly I think doing hundreds of interviews for the books has also improved the work I do for that magazine.

UG: What was your initial spark to start writing/founding your own webzine?

Dayal: Well it was a paper / physical fanzine, and this was actually the main inspiration for the project: After the 90s, zines began to increasingly be replaced with webzines and having grown up with the paper zines, I decided to do my own for nostalgic reasons and as a statement of sorts I suppose. Originally I was going to use two other writers and just do a couple of interviews myself, while also handling design and layout, but those two people didn't end up contributing a huge amount so I fell into writing them out of necessity. Around the same time I was taking photos for Terrorizer, but the zines were well received and led to me being offered writing work at Terrorizer and Metal Hammer, so I really fell into the writing side of things by accident. These days I find writing generally more rewarding, so don't spend so much time taking photos.

UG: I know exactly what you mean, it's hard to find dedicated people who would like to give something "back". Personally I think the music itself is so rewarding that I really liked the idea of helping bands out. But did the idea of actually writing and publishing books just pop out like: "Well that would be a great idea?"

Dayal: The first book was written as a personal project really, with no great goal in mind except to create what I felt was an accurate account of the creation and evolution of the black metal genre. I would have been happy for someone to write such a book, but instead all we got were articles, books and documentaries made by people who were not really into black metal themselves and so just focussed on the same bands and stories. Sonnelion - "Blaze Of Perdition" In 2009 I decided to do the job myself and spent the next four years creating 'Black Metal: Evolution Of The Cult' and 'Black Metal: Prelude To The Cult'. It was only as I came to the end of 'Evolution' that I realised there was much more to say and so I decided to write more. Developing my own publishing house seemed to me a necessity to do that because I wanted complete control of the project and I could not get that if I had signed up to another external publisher. So it was quite a natural development, and the first three releases (the third being 'Black Metal: The Cult Never Dies Vol. One') were created alongside a 'normal' job and my freelance writing work.

UG: I love the idea that someone who actually is into Black Metal approaches the topic from the same side. My heart stopped for a second when I heard in 2015, that Jonas Åkerlund is going to direct '"Lords of Chaos" and it was discussed quite controversially. What were your first thoughts?

Dayal: Talk of a LoC film has been around for so long so I was a bit surprised that it finally went into production. I think it is very, very hard to make a film based on real events and make it both accurate and enjoyable to watch, and so in that sense the odds are probably against it pleasing longtime black metal fans. On the other hand, that may not be the target demographic and I think if it is a success we will certainly see a big increase in the number of young people listening to black metal, most likely temporarily, though some may stay for the longterm. I am in some ways more curious about the effects of the film than the film itself, although it would be nice to be pleasantly surprised by the finished work.

UG: Some people might say now that "BM still is underground and needs to stay that way." If you publish "Hollywood" films or write articles like you (and we) do, doesn't that contradict Black Metal in the first place?

Dayal: I would struggle to conceive of two more different mediums than a Hollywood movie and an underground publication. I see my works as products of the underground and the readership is always going to be limited because of that. You can count the number of people who read books like mine in the thousands, or perhaps tens of thousands eventually, similar numbers to a successful Black Metal album. A mainstream movie has to reach far, far bigger numbers to pay for itself and must also reach people outside of the movement to do that. Having said all that, the argument about keeping Black Metal became moot about 15 years ago. In the 90s I was quite in favour of keeping Black Metal underground but a few breakthrough bands and the explosion of the internet meant that almost everyone is aware of Black Metal to some extent (even if it's just recognizing a picture of Abbath etc) and you can listen to the most obscure work with a few clicks on YouTube. People from outside the genre are already trying to represent Black Metal in their work, the question is whether that should be the only representation there is or whether writers and film makers who come from a Black Metal background are likely to do a better job. I would argue that the latter is the only choice really.

Dayal: Well I would hope so. Obviously there are successful pieces of art, music, film and so on that have significant merit. But this sort of metal is never going to be 'mainstream' in the same way that Metallica or even Slipknot is and the culture around it will always be suitably subterranean.

UG: That's what we all wish for I guess! But let's talk about your newest book "The Mega Zine". Are you satisfied with the feedback?

Dayal: Very happy, both in terms of the bands involved and reader comments. And in many ways it is my personal favourite of the four books, though it's hard to be objective – as with bands, you tend to feel your newest work is the best. But then, you should improve as a writer as time goes on, so it could be true. But yes, to answer your question, feedback has been very good – however, I wish there was more of it. For several reasons, we were unable to give this book as much promotion when it first came out as the previous works, so the word spread a bit more slowly. However, as of this week it is on general release and available at Amazon, Ebay, Nuclear Blast, Season Of Mist and so on, so that makes things easier.

UG: So promising times ahead - Can you already tell us something about your future plans?

Dayal: Work has begun on 'Black Metal: The Cult Never Dies Vol. Two' but I don't think this or any other books in the Black Metal series will be released until 2018. To be fair, a lot of people only seem to be discovering 'Evolution', so they have 4 books to keep them busy! And before the end of this year (most likely late in the year) there should be two more book releases that broaden our remit somewhat and explore some new territories. So there should be some very interesting releases over the next couple of years, not to mention more official merchandise from Rotting Christ, In The Woods...,1349, Ulver and more. I'm sure we'll be keeping busy as always...

UG: Sounds like a busy schedule and I hope that you will   keep up the good work! The last question now is the traditional "what If" question: So imagine meeting your younger self in 2001 with the knowledge of today - What advice would you give to yourself?

Dayal: That's easy, because 2001 was the year I began my photography degree. So I would probably tell the younger me to study something that either would be more useful to a writer, or maybe to study design full-time. And to do more interviews in those early years!

UG: Never too late for that! Thank you for your time!

Dayal: Thank you for your time man!