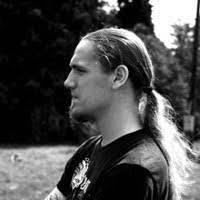 In the Estonian metal scene, as a creative and dedicated mind, you don’t do only „one“ thing. As there aren’t enough people to feed the hunger of the fans, you are (at least) in one band, you organize gigs on your own, and on the day of the gig(s) you are lighting guy, coordinator and band supervisor in one person. All of this applies to Ingmar Aasoja, who is an active singer and guitar player in his band „Thou Shell Of Death“ and who organizes one of the most important festivals in Tallinn – Howls Of Winter.

After having him interviewed in the documentary „Tallinn Under The Horns“ it’s now time to come back to him to talk about progress, Black Metal, the hardships and the scene in Estonia in particular.

Ingmar: Hello, hello. It has been over a year now and after you’re more familiar with the local scene, I’m eager to answer questions after you being dug deep in the scene here.

UG: Dugged up sounds great, but you could also say enchanted. *laughs* – So, the fifth edition of Howls Of Winter is history and maybe it’s time for a small retrospective. Would you share your best and your worst moment of the last 5 editions with us?

Ingmar: This edition was probably the most complex one. Only downside was financial side, but that isn’t connected to anything I wanted to achieve. It turned out really great. I tried to watch at least one song from every band and I really loved the quality of line-up. The biggest highlight was probably Nornahetta improvisation: that’s a once in a lifetime experience. I’ve seen them once before, but the show here was really a punch in the face. I didn’t expect anything like that.

UG: I guess the audience had the same experience and Nornahetta was definitely one of the best this year! You mentioned the monetary side and your own enthusiasm for a band. So how do you generally decide your line up?

Ingmar: That’s probably really strange. I kind of mix the different ideas of collecting bands for the line-up. I never choose bands by their name, but it’s quite common that good bands have „the name“. It’s kind of a mix of these things:

Bands I really like – when I’m ok to pay for travel to some far country to see a band, then I don’t even think about reaching break-even to bring them here

Bands, that have never played live before and I push them to do a show - Howls of Winter has maybe been kickstart for some Bands

Bands, whose members drank beer with me :) But I never do discounts in this situation.

Sometimes I don’t even like the band, but I see „the thing“ in them and know that will make the line-up more interesting. I also have a small collective of friends that recommend me some new and old names. I can discuss pros and cons with them and when I reach a moment of decision, then it’s always quite random. I also don’t want my line-up to be just another underground black metal festival… It’s really hard to achieve this. That’s not because I don’t support some scenes. Actually I do support any kind of Black Metal scenes. It’s really good when you have such filters for all the new bands nowadays. My idea is just to give the public a reason to travel here.

UG: This is for sure a luxury not every organizer can enjoy. At a certain point you obviously need to be at least at break even, unless you are kind of rich or have a job that can help to compensate monetary losses even at a higher scale. But you are right, here in Germany you have basically every year the same tasteless mix of bands that are just exchanged between the different bigger festivals and one should aim just for great bands – known or unknown. I also got the feeling the support is strong from the local scene and news about HoW spread over the borders more and more, but could you estimate how much international guests and attention you already got?

Ingmar: Our local scene is small but at the same time really loyal. Support is strong. Somehow everyone in the scene here has some part in Howls of Winter even when not in organizing, then just spreading the word and helping to gain the real atmosphere during (and around) the event.
Word about the festival has spread quite widely. I can say that most of the public is international and you mostly cannot hear Estonian language during the event. Public coverage is from Western to Eastern countries and hearing stories about scene and happenings outside the comfort zone makes this event some kind of unique for me. It’s like a once-in-a-year-gathering to hear stories and progress in other scenes.

UG: We first met at your rehearsal room with your guys from „Thou Shell Of Death“ and did our interview for TUTH - I realized that your own band only played at HoW once. Isn't it tempting to push your own project a bit and play there more often? Actually, I know a lot of German organizers who do that.

Ingmar: Actually, we've played there twice. The first Howls of Winter was just „Thou Shell Of Death“-show with some additional bands. Playing at the warm-up day has been only exception for my only-once-policy. It had it's reasons, but I can say that I've cheated here.

UG: I guess it’s better to cheat once than to play every single HoW. *laughs* So, Rock Club Tapper is run by Kaido Haavandi who happens to be kind of a metal legend in Estonia on his own, running the Hard Rock Laager festival as well as being involved in various Estonian bands. When you first came up with the idea to make HoW, did you kick in open doors or was it problematic to get the club for this purpose?

Ingmar: Hehe legend. In a personal way that’s quite true. First events during my teenager times were organized by him and I never imagined I’ll organize some festival where he will play a comeback show with the same band that I was headbanging to in the first row these times. I’ve worked with him longer than Howls of Winter. I organized some smaller shows there and happened to do lighting job for a couple of shows for him. When I started Howls of Winter, then the main guy I’m working with was club manager Tõnis. Both of them have been really supportive. When we’re talking about “The Legend” here, then Kaido is not some guy with a rockstar attitude, that doesn’t give a f*ck about local scene. I don’t think there are much club owners who actually support events holding in their venues like that.

UG: I can only put an exclamation mark on that one. He is obviously very dedicated, important for the scene and also great to talk to. So, if I recall it right, you also visited Austria for a rather underground event last year –Do you take inspiration from other festivals or do they just interest you for musical reasons?

Ingmar: I visit other festivals for their ideas and that also includes music. I assume you meant House Of The Holy? I could never achieve such a concept here and that would also never be my target. Other festivals I like to visit for example Armaggedon Descends or Menuo Juodaragis (both Lithuanian) have same kind of specific idea. And every one of these are different. So, the inspiration may be something that makes me search for my own direction.

UG: From Tallinn to Helsinki it’s just a small hop - What’s your opinion about the scene there?

Ingmar: It’s totally different there and nobody knows why. Finland is really specific in its music (industry). I would say that it is a scene that doesn’t make use of its history. They just do it and they still keep surprising. Of course, I’m talking about the UG scene. A huge number of bands is not always good. There are so much quality sounding bands with professional musicians that it nearly seems that there is no bigger variety, lesser emotions. In the same time, as the standard is high, making a name there isn’t probably as easy as in some smaller countries, where you just have to know some guys and you’re already playing with popular bands in big clubs.

UG: This is really interesting, as I always thought, due to the close capitals Tallinn and Helsinki (which could be imagined as some kind of gate between either baltics and nordics), there would be a lot of similarities. But yeah, I can agree that maybe metal in general is more famous or more accessible in Finland and therefore there are more bands. But let’s come back to Howls Of Winter. So, there are some three months left till the event – Could you give our readers a small idea about what other bands we can expect to be performing?

UG: This sounds promising. And I can definitely tell, that there are already a lot of great acts on the line-up that at least my German guys are looking forward to. Thank you for your time and looking forward to HoW!

Ingmar: Thank you for your deep interest in the Estonian scene and your support during the last years. Looking towards seeing you again here!

This interview features Ingmar Aasoja, founder of Howls Of Winter and band Thou Shell Of Death. He was interviewed by Grave from Undergrounded.